You are here: Home » Shira Rosenak

Shira is an Amitei Bronfman alumna from 2010. After growing up in Jerusalem she moved to Kfar Adumim, and has since returned to live in Jerusalem. She studied at the Beth Israel pre-military program and served in the IDF as a soldier-teacher at Kfar Etzion field school. After being discharged, she studied and later counseled at the Lindenbaum Midrasha and with hiking groups. She is currently an undergraduate student in social work at the Hebrew University; she also serves as coordinator of the ‘Maayan’ Beit Midrash at Oriya Ulpana in Gush Etzion, and writes a history column for children in ‘Otiyot’ magazine. 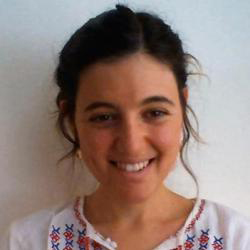