Yuval Nussan, a 2009 Amitei Bronfman alum, was raised in Hoshaya in the Galilee. In his gap year he volunteered at the Tzameret NGO, before studying at Har Etzion Yeshiva. Yuval served in the IDF combat forces as a commander. He has a Master’s degree in Hebrew Literature from Hebrew University as part of the Revivim, A Program of Excellence for the Training of Teachers in the Instruction of Jewish Studies. He also studied group management at Oranim College. Yuval has facilitated workshops and groups at the Gesher organization and at Amitei Bronfman as manche (counselor) in 2019-20, and teaches Humanities in a high school in Jerusalem. He lives in Jerusalem with his wife Elisheva and child Neta. 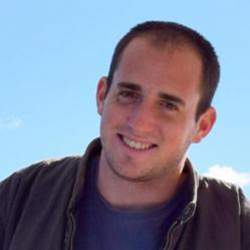