You are here: Home » Dahlia Kronish

Rabbi Dahlia Kronish is the Director of Jewish and Student Life at the Abraham Joshua Heschel School in New York City. Dahlia has been working at the Heschel High School for over ten years. At Heschel, in addition to overseeing programming and the student experience outside the classroom, Dahlia teaches Talmud, Jewish Ethics, and Tanach. The daughter and granddaughter of rabbis, Dahlia grew up in Jerusalem in the TALI school system. Dahlia was ordained at the Jewish Theological Seminary in New York. For over ten summers, Dahlia worked at Camp Ramah in New England and before that at the Ramah-Noam sleep away camp and the Ramah Day Camp in Israel. Dahlia and her spouse Josh lived in Chicago where she worked at the Solomon Schechter Day School of Metropolitan Chicago. They now live in Riverdale New York together with their sons Roei Yehuda and Erez Nevo. Dahlia served on The Bronfman Fellowship Faculty in 2017. 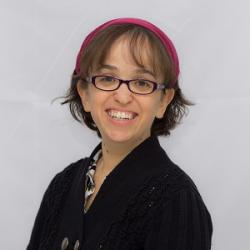