Evan Parks is a lecturer in the Core Curriculum and fellow of the Department of Germanic Languages at Columbia University, where he received his PhD in 2021. Evan’s research focuses on modern German literature and culture, the entanglement of German and Jewish intellectual traditions, and the relationship between literature, philosophy, and other art forms. His work also treats correspondences between modern German and Hebrew literatures. He is completing a book project that explores how the post-Shoah poetry of Paul Celan interacts with the agendas of several 20th century thinkers. Evan was Bronfman Faculty in 2019 and 2021, and facilitated Bronfman alumni trips to Germany in conjunction with Germany Close Up in 2015 and 2018. Originally from Atlanta, Georgia, Evan was a Bronfman Fellow in 2005. He lives in Manhattan with his partner Eliana and daughter Selah. 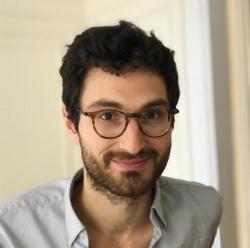