Rabbanit Dr. Jennie Rosenfeld is an educator, author, and spiritual leader. She is currently writing a book on singles and sexuality from a halakhic and ethical perspective with an Advanced Torah Fellowship from the Memorial Foundation for Jewish Culture and a grant from the Hadassah-Brandeis Institute, while teaching and serving as a Mashgicha (spiritual advisor) at Midreshet TVA. Previously, she served for five years as the Manhiga Ruchanit (female spiritual leader) in Efrat, where she also directed the rabbinic court for financial matters. She completed the Susi Bradfield Women’s Institute for Halakhic Leadership program at Midreshet Lindenbaum and received permission to give halakhic rulings (“heter hora’ah”) from Rabbi Shlomo Riskin and Rav Shuki Reich. She holds a PhD in English from the CUNY Graduate Center, where she wrote her dissertation on “Talmudic Re-readings: Toward a Modern Orthodox Sexual Ethic” as a Wexner Graduate Fellow. She co-authored Et Le’ehov: The Newlywed’s Guide to Physical Intimacy (Gefen 2011; Hebrew translation 2013). Rabbanit Jennie has taught Torah in high schools and adult education internationally and was named one of the “36 under 36” by the Jewish Week in 2008. She lives with her family in Katamonim. 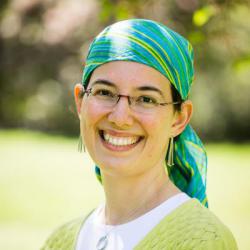