Vanessa L. Ochs is the author of The Passover Haggadah: A Biography, and Inventing Jewish Ritual (winner of a 2007 National Jewish Book Award).  Her other books include Sarah Laughed, The Jewish Dream Book (with Elizabeth Ochs), The Book of Jewish Sacred Practices (edited with Irwin Kula), Words on Fire and Safe and Sound. For her writing, she was awarded a Creative Writing Fellowship by the National Endowment for the Arts. Rabbi Ochs is a professor in the Department of Religious Studies and Jewish Studies Program at the University of Virginia where she teaches courses in Judaism, anthropology of religion, religion and feminism and spiritual writing. Ochs earned her B.A. in Drama and French from Tufts University, an M.F.A. in Theater from Sarah Lawrence College, and Ph.D. in Anthropology of Religion from Drew University. She was ordained as a rabbi in 2012. She lives in Charlottesville, Virginia with her husband Peter. They are they are the parents of Juliana Ochs Dweck and Elizabeth Ochs. 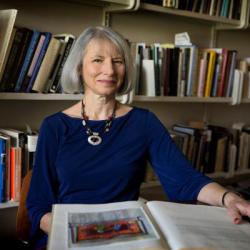